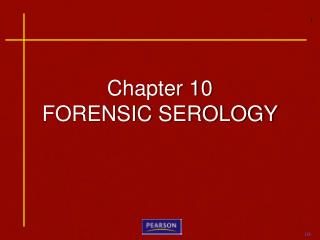 Chapter 10 FORENSIC SEROLOGY. Nature of Blood. The word blood refers to a highly complex mixture of cells, enzymes, proteins, and inorganic substances. Plasma, which is the fluid portion of blood, is composed principally of water.

Serology - . serology. blood is the bodily substance most commonly found at the scene of a crime or on a person,

Chapter 12 FORENSIC SEROLOGY - . questions to ask. is it blood? is it animal or human? what is the blood type? what do

FORENSIC SCIENCE Serology - . forensic file #2. a murderer thinks that they can wash away all signs of blood by using

Forensic Serology - . blood. what exactly is blood??. fluid portion of blood= plasma primarily water and is 55% of the

Forensic Serology - . objectives: identify and describe the components of human blood list the a-b-o antigens and