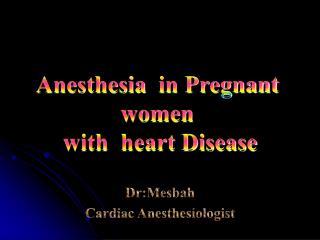 Heart disease in Women - Cardiovascular disease is the leading cause of death in women, regardless of age or ethnicity

ANESTHESIA FOR A GERIATRIC PATIENT WITH HEART DISEASE - . dr.balavenkat,dr.kalyanasundaram,

Pregnant Women Are Having Heart Attacks. But Why? - There is a high possibility of encountering a cardiovascular failure