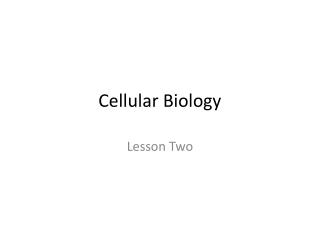 Cellular Biology. Lesson Two. Cellular Biology. Focuses on understanding living process at a molecular level Cellular biology has opened up new discoveries in genes responsible for cancer, events regulating how a cell divides, and how organisms develop from a single cell. Learning focus.

CELL BIOLOGY - . cell theory. this was forwarded by mathias schleiden and theodor schwan. all living things are made up

Review of the Cell (Cellular Biology) - . a view of the cell. cellular organization. cell tissue – group of cells

Cellular biology - . a review. what is the smallest element of protoplasm?. the cell which of the following

Cell Biology - . fundamental units of life 11/29. the inner life of a cell. you are now shrinking to a millionth of your

Cell Biology - . what is a cell?. video http://www.youtube.com/watch?v=zufan_aetzi&amp;feature=fvw. key terms and

BY1101 Introduction to Molecular and Cellular Biology - . tutorial for module by1101: cells &amp; organelles joe