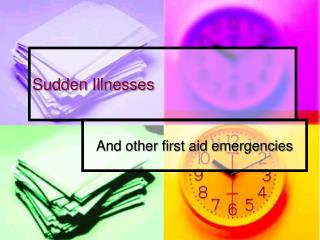 Parathion Poisoning in Sierra Leone - . the

Heat Illnesses - . scenario. you are one of the doctors on duty at the great north run. it is an unusually hot, humid and

Recording and Reporting Occupational Injuries and Illnesses - . maryland association of boards of education. purpose (of

Recognizing and Caring for Sudden Illnesses - . http://www.instructorscorner.org/media/videos/e1.html. signals of sudden

Illnesses Suffered - . world war Ⅰ. joanna j iang a. what diseases and illnesses were common in the trenches of world

The Body and Illnesses - . parts of the body. types of illnesses. headache: a sore head a severe type of headache is a