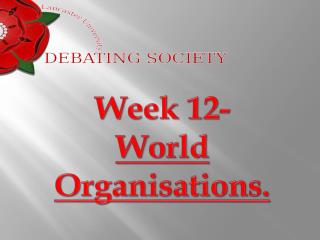 World Civilizations Week 3 Bell #2 04/12/12 - . what qualities do you think an absolute monarch should possess? how would

Week 12 - . what you need to know:. discovering computers: ch 15 computer careers and certification. what career

Week 12 - Database design . week 12. forms. table many records at a time some fields do not fit on one screen column and

WEEK 12 - . establishing the client/ practitioner relationship. joining and listening. now that you have all the skills

Week 12 - . crct questions. 1 . in an area where the lithosphere is being pulled apart, the crust . folds and crumples