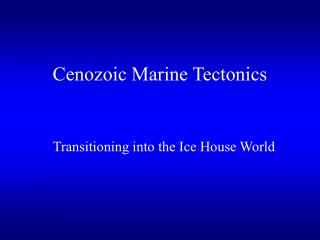 CENOZOIC LIFE - . the cenozoic = “the age of

Plate Tectonics - . the driving force of earthquakes. before we can understand earthquakes and their effects, we need to

Cenozoic -The development of the Earth as we know it today - . at only 66 million years long, the cenozoic is only 1.4%

THEORY OF PLATE TECTONICS - . plate tectonics. a. defined: earth’s crust and part of the upper mantle are broken into

Plate Tectonics and Volcanoes - . edu 370 – earth science. evidence for the theory of plate tectonics. in 1912 alfred

4.2 The Theory of Plate Tectonics - . tectonics – ( g reek ) meaning “construction” tectonics: the study of the

Mesozoic through Cenozoic - . what was happening back in the western cordillera?. all the stuff we already talked about

Plate Tectonics - . plate tectonics is a theory that describes the formation, movements, and interactions of earth’s

Lesson 13: Plate Tectonics I Geological Oceanography - . we’ve learned a lot about physical motions in the ocean.

The Geology of the Cenozoic Era - . introduction. the cenozoic began ~65 mya and continues until the present cenozoic