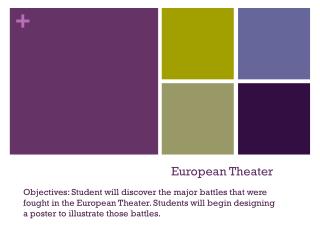 European Theater. Objectives: Student will discover the major battles that were fought in the European Theater. Students will begin designing a poster to illustrate those battles. . Theater.

The European Theater - . the soviets and germany. nonaggression pact between ussr and germany both agree to split poland

Pacific Theater - . operations will be spread out over a larger area than the european theater sea power plays bigger