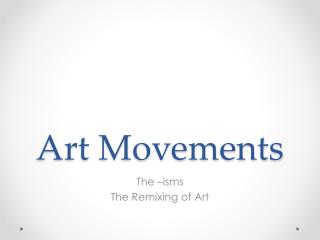 20 th Century Art Movements - . fauvism . fauvism was a joyful style of painting that delighted in using bold colors. it

Modern Art and its Movements - . the beginning of modern art

Art Movements of the 20 th Century! - . a look at major art movements that influenced art in our modern society. what is

Movements - . flexion-extension. flexion - reduces the angle between two bones at a joint. usually a sagittal plane

MOVEMENTS - . -movement around a joint may be around any one (or more) of three axes -most movements are found in pairs

Peace Movements - . as the war progressed, a number of groups &amp; individuals attempted to arrange a peace. they