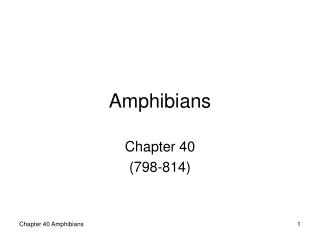 Amphibians - . - means ”double life”, spends part or all of its life in water - skin is smooth and must remain damp

Amphibians - . http://www.youtube.com/watch?v=sfensyycpq4&amp;feature=fvw poison dart frog. what is an amphibian?.

Amphibians - . diversity. ex: frogs, salamanders, newts, and caecilians amphibians are born without legs , and they grow

Amphibians: - The first steps towards terrestrial vertebrates. amphibians:. what are some common amphibians?. frogs toads

Amphibians - . means “ double life ” have thin, moist skin , most have 4 legs are able to live on land , but rely on

Amphibians - Are classified into. anura. urodela. amphibians. go to anura. go to urodela. no tail. hind legs are longer

Amphibians - . animals with a double life. primary characteristic. amphibians have a completely aquatic larvae which