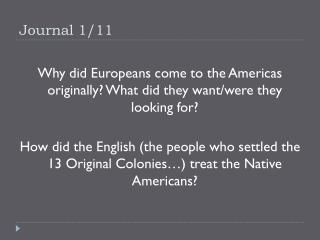 Journal 1/11. Why did Europeans come to the Americas originally? What did they want/were they looking for? How did the English (the people who settled the 13 Original Colonies…) treat the Native Americans?. New France. The French in North America. Why colonize?. Spanish were________ in:

Chapter 2 The Challenges of Parenting - . the developing child mrs. jackson. 9/8/10. test over chapter 1 turn in chapter

Station 1: Forces and Motion with Max Axiom (comic book) - . directions: work together to read the comic book and

Journal 1: - . how does the coriolis effect influence the wind? how do you think this would affect currents in the

Journal Club - . how to use and article about a diagnostic test satyen gada, md lt mc (fs) usn ncc pediatric

Reflective Journal Guidelines - . journal participation and completion will be worth 25 percent of your grade. we will

Journal #3 - . what do you do or say when you are trying to win an argument? list 3-5 strategies. argument. if you are