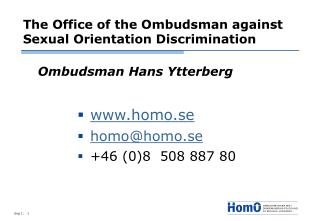 The Office of the Ombudsman against Sexual Orientation Discrimination The Office of the Ombudsman against Sexual Orientation Discrimination

+New Provider Residential Services Orientation - . state of georgia. introduction. what we will do - educate presented by

Sexual Offenders: What you need to know, and why - . red river children's advocacy conference fargo, north dakota may 10,

Ombudsman [0mb] Protecting the rights of minorities - . everybody is allowed to be the author of their own life groups