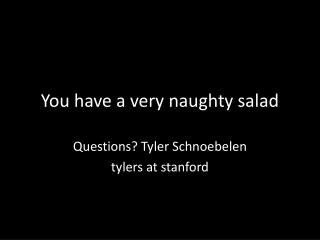 You have a very naughty salad. Questions? Tyler Schnoebelen tylers at stanford. (Key to reading this deck now that it’s posted). Most of the content is in the notes field. Check out Appendix A for logistics and follow-up stuff that Lauren started the class off with “The Very Essence of Leadership is That You Have to Have a Vision” - -- theodore hesburgh. noaa’s

You have been patient and kind Thank you very much - In the name of god the beneficent, the merciful oocur 2013 market

Salad - . what is salad?. salad is a dish consisting of small pieces of raw or cooked food mixed with a sauce. it is

You Have a Website! - . now what?. a www orkshop hosted by tom feist, ciw master e-commerce developer webmaster,

naughty stories: A Simple Definition - How to really go down on the woman and since i am a small bashful about it , i

‘”you have a voice!” - . a national kiosk network for distributing information to rural communities and getting

You Have a Choice! - . differentiating through choice boards marcella reppenhagen. time for an icebreaker!. choice board

The Naughty Perfumes - . by: mariam qarooni. the naughty perfumes. mrs. perfume was too busy cleaning up the mess that

Have you ever made a mistake? (sure you have) - Today: we’ll be studying the story of how david broke three of the ten

A very warm welcome to YOU - . interactive sessions on executive programme in business management – international

Wish You a Very Happy Diwali - Here are some of the best wishes, messages, sms, images, wallpapers, quotes, whatsapp, and