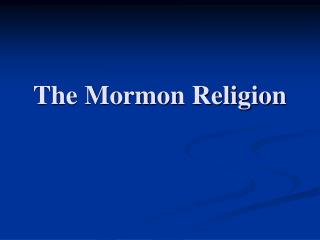 Mormon - . by: samantha krebs and jayde jenkins. history. mormonism was founded in 1830, in fayette, new york founded by

The Book of Mormon - . www.kevinhinckley.com. lesson #1. what is the purpose of the book of mormon?. the lost 116 pages.

The Book of Mormon - . 2 nephi 26-30 nephi prophesies and counsels. 2 ne 25 prophesied of the destruction and scattering

The Mormon Pioneer Trail - . by: kyle mclaughlin. where it started. the trail started in the illinois. the trail ended in

The Book of Mormon - . www.kevinhinckley.com. honesty. in a trial, a southern small-town prosecuting attorney

The Book of Mormon - . 2 nephi 26-30 nephi prophesies and counsels. 2 ne 25 prophesied of the destruction and

The Path of the Uncorrelated Mormon - . john dehlin. how do we create local and global communities of support in support

Mormon 1-6 - . true or false:. true. 4 nephi describes a people who devotedly kept the commandments. true. 2. these