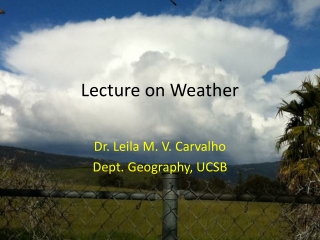 Lecture on Weather. Dr. Leila M. V. Carvalho Dept. Geography, UCSB. Self motivation…. PhD in Meteorology at the University of Sao Paulo (USP). Born in Sao Paulo City, Brazil. Previous employment (until 2008): professor at USP at the Department of Meteorology.

lecture 5 Weather - . a: it’s bitterly cold today. b: it’s much warmer than yesterday. a: yes. you’re from beijing,

Influences on Weather - . what is weather?. weather is the state of the atmosphere at a certain time and place. the state

Influences on Weather - . eq: what has an effect on the weather?. weather: the state of the atmosphere at a particular

Weather &amp; Climate LECTURE 2 - . moisture in the atmosphere. evaporation and condensation: accompanied by

WEATHER AND CLIMATE LECTURE 1 - . atmosphere: structure and composition. atmosphere is made up of layers: 1. troposhere -

Moving on to Weather! - . but first, more about air masses and the atmosphere. atmospheric composition. nitrogen (n2)

Lecture on: - . frames. frames versus tables. frames allow part of the page, usually a navigation bar, to stay put. the

Fronts and severe weather lecture 22.3 - . fronts. a front is where masses of air collide. stationary front. cold and

Impact of Weather on Incidents - . analysis using 2007 data. methodology. select all the incidents which occurred on i-5