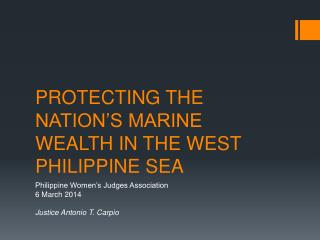 PROTECTING THE NATION’S MARINE WEALTH IN THE WEST PHILIPPINE SEA

PROTECTING THE NATION’S MARINE WEALTH IN THE WEST PHILIPPINE SEA Tips for Protecting Your Intellectual Property - Are you worried about you intellectual property? if someone stealing

Safe and Sacred: Protecting All God’s Children - . training component a for use in the diocese of crookston original

Nationa l Parks - . what do you think?. ask most people what they think the reason is for having parks, they may say its

Gospel of Wealth - . one of god's top priorities is to shower blessings on christians in this lifetime. corollary: one of

A. PHILIPPINE GEOGRAPHY - Describe the expansion of spain in the philippines under legazpi’s leadership by means of a

Protecting Client Data HIPAA, HITECH and PIPA Part 1A - . module #1a will cover…. what is hipaa? hipaa &amp;

Life in the West - . 3 million native americans lived in the west before europeans arrived they were diverse in language