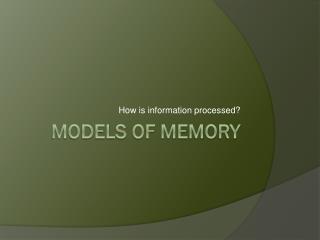 Models of Memory - . attempt to give a systematic account of the structure and functioning of memory tend to be sketchier

MODELS OF MEMORY - . definition of memory : “the retention of learning or experience”. memory. memory analogies

Models of memory - The multi-store model including the concepts of encoding capacity and duration. strengths and

Models of Hierarchical Memory - . problem starts out on disk solution is to be written to disk cost of an algorithm is

QUANTITATIVE MODELS OF MEMORY - . the value of explicit models precision of thinking explanatory power interval- or