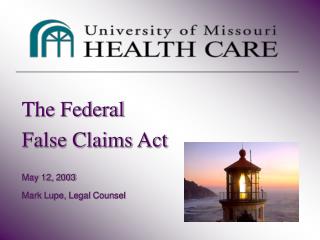 The Federal False Claims Act May 12, 2003 Mark Lupe, Legal Counsel. Qui Tam Actions. "There is no kind of dishonesty into which otherwise good people more easily and frequently fall than that of defrauding the government." Benjamin Franklin . Qui Tam Actions.

The False Claims Act - . the federal false claims act as it relates to architects, engineers and other design

Are You Prepared for a Federal Program Audit: What You Need to Know - . dr. ronny beard, superintendent rhonda crass,

The GOOD, the BAD, and the UGLY The Federal [Civil] False Claims Act (FCA) - . the fca fills a gap in the federal law

Compliance 101:  What you Need to Know to Protect Yourself and Your Practice - . office of compliance brody school of

The Avanti Law Group: Under False Claims Act - Under false claims act, whistleblowers get their share of billions.

Seclusion and Restraint: Legal Claims under Federal and State Law - . created for the tasc 2010 conference by kristine