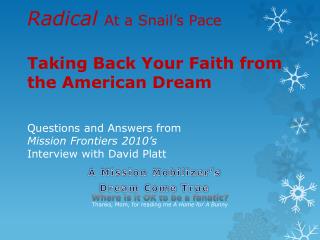 Radical At a Snail’s Pace Taking Back Your Faith from the American Dream Questions and Answers from Mission Frontiers 2010’s I nterview with David Platt. A Mission Mobilizer’s Dream Come True. Where is it OK to be a fanatic? Thanks, Mom, for reading me A Home for A Bunny. The Challenger Customer: How to Identify and Engage the Right Customer - In the challenger customer, ceb research

Over the Rainbow - . somewhere over the rainbow, way up high, there’s a land that i heard of, once in a lullaby*,

My dream computer - . by j hanava r amisetty. cpu: intel core i7. cpu stands for central processing unit which is the

Savings and Investing - . why save 8.1. what do you dream of achieving in your lives? how do you think you will make

Overview of MN Dream Act MAFAA Conference May 2014 - . ginny dodds manager, state financial aid. is daca the same as the