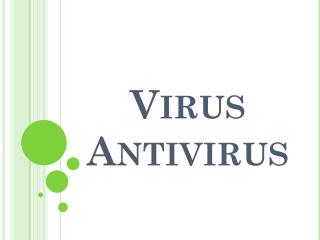 ANTI-VIRUS PROTECTION - . what is a virus…. the computer viruses are just like taxes.....if we own a pc or laptop it

AntiVirus Software - . kaspersky labs. introduction. a computer virus can be very damaging, the best way to protect your

How to delete the autorun.inf virus with avast antivirus - Autorun infection is dangerous for pc hard drive; it