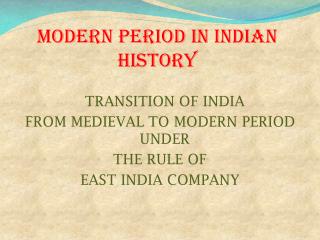 MODERN PERIOD IN INDIAN HISTORY. TRANSITION OF INDIA FROM MEDIEVAL TO MODERN PERIOD UNDER THE RULE OF EAST INDIA COMPANY. The medieval period saw the disintegration of the Mughal Empire after the death of Aurangzeb. India in eighteenth century.

7 Quick And Healthy Indian Recipes - Lately, indian food menus are becoming more and more popular as around the world.

Classic and Modern Assimilation - . ahd - march 2, 2011. immigration: nativism and reactions - connect. what do you know

Russia During the Early-Modern Period - . review of russian history. kievan rus dominated by kiev, but various other

Indian cuisine - . indian cuisine has been influenced by a 5000 year history of various groups and cultures to the

AP WORLD HISTORY - . telescope or microscope – or a bit of both?. 5 thematic periods of history. foundations (8,000

History Revision The Indian Raj - . recap of (a) the early stages of the british east indian company when they went