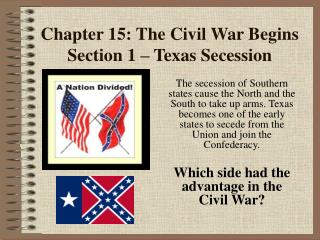 Chapter 15: The Civil War Begins Section 1 – Texas Secession. The secession of Southern states cause the North and the South to take up arms. Texas becomes one of the early states to secede from the Union and join the Confederacy. Which side had the advantage in the Civil War?.