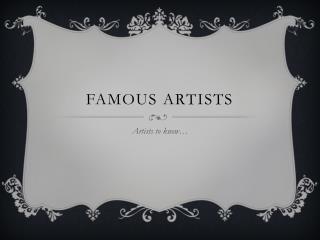 Ordinary Things Through the Eyes of Artists - . starry night by vincent van gogh. no one saw flowers like georgia

Famous Manga Artists and their Manga

Famous Artist Biography Presentation - . name of the artist your name spring 2013. insert portrait or self-portrait of

Famous Art Museums - . the louvre, the prado, the alte pinakothek , and the uffizi. the

world's top 5 most famous paintings - Http://www.paintingsgalore.com top 5 paintings that leave an impression on our