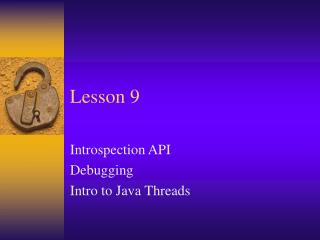 Lesson 9. Introspection API Debugging Intro to Java Threads. What are threads?. Like several concurrent subprograms running within the same address space. Within a program, individual threads are explicitly “spawned” and give the appearance of simultaneously running sequences of commands. Lesson 9 - . stress management. stress – the response of the body to the demands of daily living stressor – source or

Lesson 9 - . how can they be heard?. missions perspectives syllabus. cultural understanding culture. homework

Lesson 9 - . day 1. words with vcccv. discuss the meanings of the words. write 4 spelling words on the board. which 2

Lesson 9 - . resolution method (continuing, examples). verifying an argument:. (anybody) who knows paul and mary is sorry