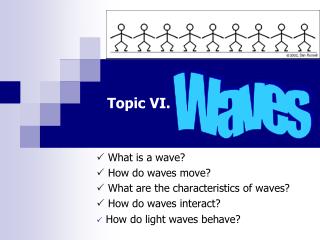 Topic VI. Waves.  What is a wave?  How do waves move?  What are the characteristics of waves?  How do waves interact? How do light waves behave ?. I. Introduction to Waves. A. Wave : a disturbance produced by a particle vibrating or oscillating about an average position

Chapter – VI - Prospectus . chapter – vi . after the formation, the company needs necessary amount of money to

Topic VI: The Dynamic Earth - . earth’s four zones: . crust : the outside or surface—made up of mostly igneous rock

Chapter Vi - . matter changes and chemical reaction. learning objective after learning this unit, you are expected to

By the end of this topic you should be able to: - Ø. explain with the aid of an annotated diagram, why tropical