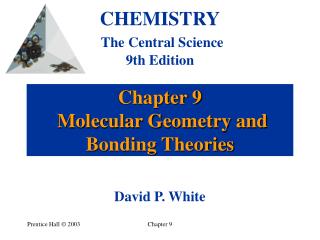 CHEMISTRY The Central Science 9th Edition. Chapter 9 Molecular Geometry and Bonding Theories. David P. White. Molecular Shapes. Lewis structures give atomic connectivity: they tell us which atoms are physically connected to which. The shape of a molecule is determined by its bond angles.

Covalent Bonding - . chapter 8. molecular compounds. these toy models are made from circular pieces joined together in

Lecture 13. Geometry Optimization - . references. computational chemistry: introduction to the theory and applications of

Honors Chemistry - . section 6.5. molecular geometry. the properties of molecules depend not only on the bonding of