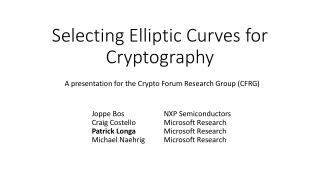 Cryptography - . (cryptography). the basics cryptography deals with techniques for secure communication in the presence