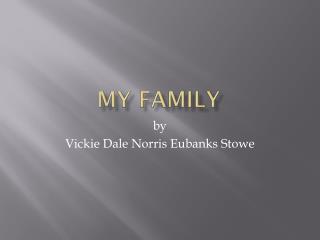 My Family. by Vickie Dale Norris Eubanks Stowe. This is me . This picture is still pretty much what I look like today. My hair is a little grayer and shorter, and a few more wrinkles . Born: October 30, 1947. This is my dad, Victor Norris.

Me and my family - . this is me. my name is bart. this is my mother. her name is marge. this is my father. his name is

My family - . i have a family . my family is friendly , creative and hospitable . we are two persons and three pets in

My family - . daddy. the name of my father is joemar m. aguilo… he is physically short, and dark. he’s not my

MY FAMILY - . a family photo. my family. me: pedro rubio flores my wife: sara pino de rubio my son: pedro rubio pino my

My family - . let me introduce

My Family! - . mother: ma. eloisa roa. this is my mother! she’s pretty much hardworking and kind! i usually call her

MY FAMILY - . by callum kennedy. today i am going to tell you about my family. so get ready because its going to be a