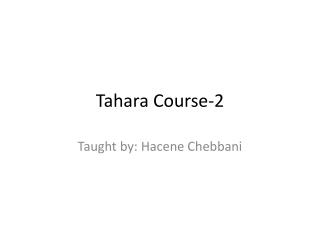 The Fiqh of Tahara - . purification. why are we starting with tahara

Fiqh of Tahara-4 - . taught by: hacene chebbani. fiqh of wudu’(ablution). merits of wudu ’: being distinguished on

Fiqh of Tahara-6 - . taught by: hacene chebbani. nullification of wudu’. things that nullify the wudu ’ can be

Course 2 - Warm up. problem of the day. lesson presentation. lesson quizzes. course 2. warm up 1. what is the area of a

Tahara and As Salah Purity and Prayer - . gratitude to the great blessings that allah has bestowed upon his servants