Over the Rainbow - PowerPoint PPT Presentation 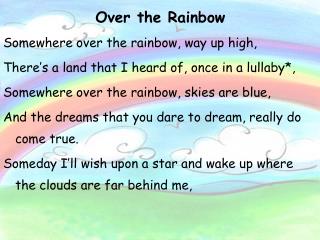 Thinking About History - . how i learned to stop worrying and love social studies. happy constitution day!.

Planting a Rainbow - . a first grade stem project. challenge. your group will design and build a rainbow flower garden.

for colored girls who have considered suicide/ when the rainbow is enuf…. by Ntozake Shange - . part i of i. ntozake

Colors of the Rainbow - . what are the colors?. the colors that we see most often are: - red - orange -

Formation of Rainbow - . what is rainbow?. an arch of colors formed in the sky in certain circumstances, caused by the

Judy Garland “Over the Rainbow” - . cultural importance 1. the aural symbol of one of the best-loved films of of all

Saint Patrick’s Day 2014 Somewhere Over the Rainbow - . somewhere over the rainbow by israel kamakawiwoʻole.

The Wizard of Oz - . somewhere over the rainbow way up high, there's a land that i heard of once in a lullaby. somewhere

“Over the Rainbow” Written by: E.Y. Harburg Composed by: Harold Arlen Sung by: Judy Garland - . power point by: