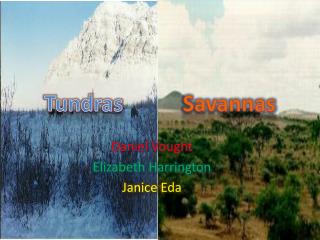 Tundras - . tundra is the coldest of all the biomes. tundra comes from the finnish word  tunturia , meaning treeless

Savannas - . plains full of grasses and scattered trees and shrubs. dry climate, such as east africa and western india.

Savannas - . by: erica harden. unique facts. a savanna is a rolling grassland scattered with shrubs and isolated trees,

Savannas - . abdulla al-attiyah. savannas are located in australia, india, south america and mostly africa. this is how

Fire and Savannas - . oct 14, 2010. what is a savanna?. scattered trees and sometimes shrubs dense herbaceous understory

GRASSLANDS AND SAVANNAS - . locations of grasslands. grasslands are located in the middle latitudes, in areas with too

GRASSLANDS AND SAVANNAS - . locations of grasslands . grasslands are located in the middle latitudes, in areas with too

Grasslands: Prairies and Savannas - . by: julie seong &amp; magda martynko. grasslands around the world. locations of

Bush encroachment in African savannas - . david ward. how do we go from this ?. to this ?. namibia. india. bush

The History of Fire Modelling with comments on How Savannas are Different - . bob scholes csir environmentek