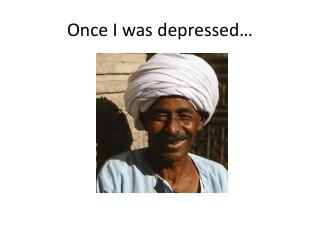 Once I was depressed…

Once I was depressed… - PowerPoint PPT Presentation Once I was depressed…. But then I went to Timbuktu. The people were so cheerful and the weather was perfect . Timbuktu was so easy to get to from Algeria!. I started at Algeria, and traveled South. You know what I hit? Timbuktu.

Once I was depressed…

Revitasence Serum>>> http://testboosthelp.com/revitasence-serum/ - The most vital source of skin tissues are its

LAW 531 Final Exam Latest UOP Tutorials - Confused and depressed about which tutorials to choose? here is the tip. try us

How to Find Value Plays - . depressed multiples. vs low multiple as a screen. price/share. “the multiple” =.

Mindfulness Based Cognitive Therapy for Depressed Patients with Coronary Heart Disease: - Results of a controlled trial.

iAm - . typographic self-portraits. portraits. = a picture of a person, group of people or animal • portraits usually