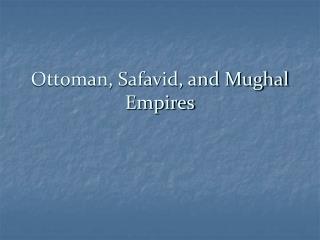 Ottoman, Safavid, and Mughal Empires. Ottoman: Rise to Power. Seljuk Turks began to decline, the Osman began to expand. Gunpowder empire –success largely based on the mastery of the technology of firearms.

FROM TRADE TO TERRITORY - . aurangzeb last mughal ruler who established control over a very large part of the territory