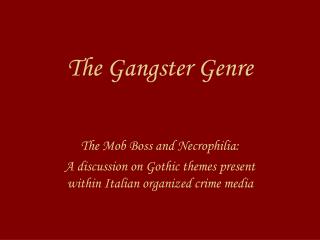 The Gangster Genre. The Mob Boss and Necrophilia: A discussion on Gothic themes present within Italian organized crime media. This is a crash course on the study of Gothic themes:. The Gothic template stems from the biblical fall of man.

Was Henry VII a gangster? -  starter: these pictures all show things to do with ‘gangsters’ (some real, some not).

Thriller Genre &amp; Narrative Themes - . genres in part can be defined by how the narrative disruption is presented,

Ethnicity and race in film theory - . problems of definition: the term &quot;black&quot; cinema, even