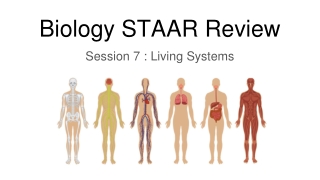 Biology STAAR Review. Session 7 : Living Systems. Housekeeping. •WELCOME!!!! • NO EATING OR DRINKING ALLOWED IN THE AUDITORIUM •Put away your phones and any other distractions •Have a pen & a highlighter handy. Circulatory/Cardiovascular System. Biology StaAr review- CATEGORY 1 - . (4) science concepts. the student knows that cells are the basic structures of all

STAAR Review - . category 4 students demonstrate an understanding of the structures and functions of living organisms and

STAAR Review - . the important thing about staar… is that i do my best!. what do you know about staar?. poetry review.

STAAR REVIEW - . lgi 2013. purpose. the purpose of the lgi review is to review all of the information we have covered

STAAR REVIEW - . physics. newton’s 3 laws of motion. law of inertia: a body at rest wants to remain at rest, a body