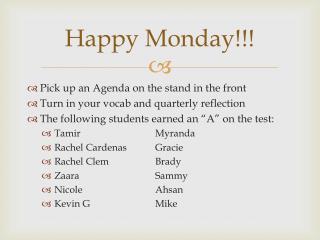 Happy Monday!!!. Pick up an Agenda on the stand in the front Turn in your vocab and quarterly reflection The following students earned an “A” on the test: Tamir Myranda Rachel Cardenas Gracie Rachel Clem Brady Zaara Sammy Nicole Ahsan Kevin G Mike. Age of Jackson and Reform. HAPPY NEW YEAR AND WELCOME BACK!!!! - . pick up a warm-up on the stand in the front color it, and write a new years

The Happy Face Killer - . keith hunter jespersen. “i know how to kill someone and get away with it.”. why was he

What Makes People Happy? - . i would go to work on the show and i felt awful every day... i felt like some kind of