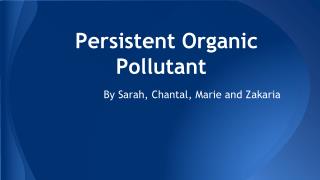 Stockholm Convention on Persistent Organic Pollutants - . a global treaty to protect human health and the environment

An Introduction To The Health Effects of Persistent Chemical Pollutants - . a small dose of ™ pollutant. persistent All About The Convenience Of Organic Food - Organic food comes from organic farms, for example they are produced by