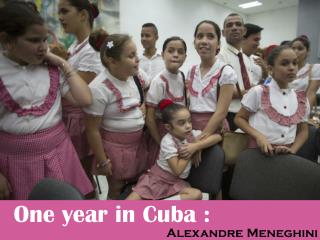 One year in Cuba: Alexandre Meneghini Photographer Alexandre Meneghini has documented daily life on the island over the last year.

One year in Cuba: Alexandre Meneghini

Obama visits Cuba - President obama makes a historic trip to cuba, the first visit by a sitting u.s. president since

Field of dreams in Cuba - Nurturing the big-league ambitions of the island's young baseball players, as the mlb seeks

Star-spangled Havana - As cuba prepares to raise the u.s. flag at the embassy in havana, residents don the stars and

Cuba-U.S. ties - After more than 50 years, the united states and cuba are set to restore diplomatic

The art of Cuba - The latest installment of the havana biennial art exhibit amid a thaw in u.s.-cuba

Cuba - . bailey weber. christmas didn’t become an official holiday until 1997. cuba is the most populated country in