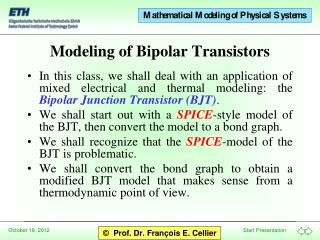 In this class, we shall deal with an application of mixed electrical and thermal modeling: the Bipolar Junction Transistor (BJT) . We shall start out with a SPICE -style model of the BJT, then convert the model to a bond graph.