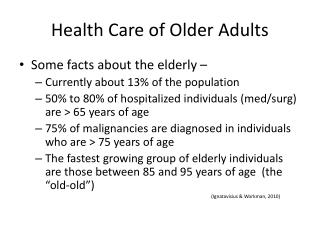 Health Care of Older Adults. Some facts about the elderly – Currently about 13% of the population 50% to 80% of hospitalized individuals (med/surg) are > 65 years of age 75% of malignancies are diagnosed in individuals who are > 75 years of age Health Alterations in Older Adults - . janet duffey, rn, ms, aprn, bc. think about this…. a group of florida senior

Long Term Care in Older Adults - . seki balogun, md, facp. objectives. by the end of this session, students will be able

Polypharmacy of Older Adults - . objectives. describe the demographics of medication usage identify the effects of