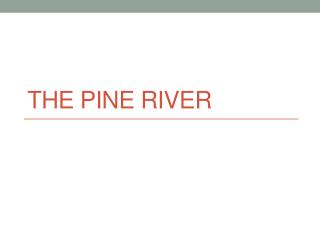 The Pine River. The Pine River is very Contaminated. After over 40 years of producing chemicals and dumping waste the site of the plant and the river were incredibly toxic . High levels of DDT, 32,000 parts per million, were measured in the Pine River in 1996.

Pine Wood Flooring: 10 Things to Know About This - Http://arunachaltimber.com/...we have never wanted to be too many

CRCT AFRICA TARGETS - . 1. what is the major physical barrier on the continent of africa? black sea sahara desert horn of

over the river - . after the game. take a little. just the same. it’s only me. think before you act. live and play. try

THE RIVER IS YOU There is such peace there is such joy there is a river flooding my soul - . oh the river is you it’s

The River Thames - . about the river. it’s part of the longest river in england, it has 45 locks, is home to over 25

The Pine Park Mystery - . vocabulary. caused. made something happen. the rain caused the flowers to bloom brilliantly .

Welcome to the Chena River Lakes Flood Control Project, home of Bucky the Moose, and many of his friends! - The moose