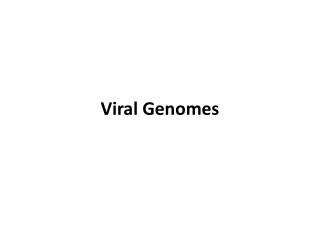 Viral Genomes. Virus. A virus is a non-cellular particle made up of genetic material and protein that can invade living cells. Viruses are very small – smaller than the smallest cell. They are usually surrounded by a capsid of proteins. GENOMES - . the entire genetic compliment of an organism. the complete set of instructions for making an organism it

Genomes - ? elsevier 2005.. the structure and complexity of virus genomes. virus genomes may be:single-stranded or

Genomes - . http://www.ornl.gov. each cell within an organism contains a complete genome, but only deploys a fraction of

Plastid genomes - . a small structure occurring in the cytoplasm of plant cells. the most important are the chloroplasts.

Modelling genomes - . gil mcvean department of statistics, oxford. why would we want to model a genome?. to identify

BS2009 - GENOMES - . dna replication and repair. replication – general principles start must be ready must know where