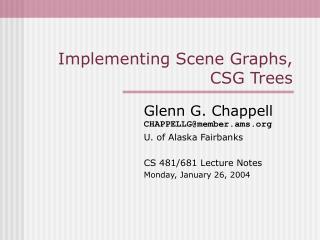 Hierarchical and Object-Oriented Graphics - . construct complex models from a set of simple geometric objects extend the

Lecture 6 Animation - . learning outcomes by the end of this module, you will be able to explain: captured animation the

CSC 830 Computer Graphics Lecture 5 Shading - . course note credit: some of slides are extracted from the course notes of

Computer Graphics 9: Clipping In 3D - . contents. in today’s lecture we are going to have a look at some perspective