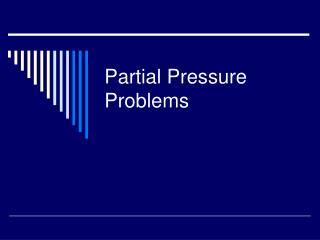 Dalton’s Law of Partial Pressure - . dalton’s law of partial pressures. for a mixture of gases in a container, p

Review of Gases - . the nature of gases…. gases all have common physical properties: mass easily compressible take the

Gases and Gas Laws - . introduction. the properties of gases will be introduced along with five ways of predicting the

Chapter 11 Gases - A hyperbaric chamber is used in the treatment of certain diseases. chapter 11 gases. 11.10 partial

Properties of Gases - . the properties of gases. gas can expand to fill its container gases are easily compressed, or

Molar Volume, Avogadro's Law and (a little bit about) Dalton’s Law of Partial Pressures - . molar volume. how much

Gas Laws: Dalton’s Law At the conclusion of our time together, you should be able to: - . explain dalton’s law use

Dalton’s Law of Partial Pressures - . in a mixture of non-reacting gases each gas particle behaves independently

Dalton’s Law of Partial Pressures - . (this is our last law!!). background. john dalton studied the behavior of gas

Chapter 5: Gases and the Kinetic - Molecular Theory - . 5.1 an overview of the physical states of matter 5.2 gas pressure

More partial and semi-partial - . the show. this is meant to be viewed as a slide show and not printed out. hopefully it