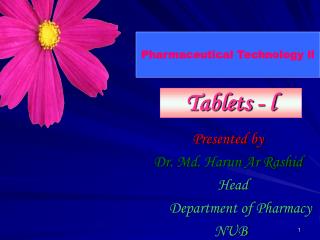 Tablets - . a tablet is a mobile device that allows the user to have access to the internet, music, movies, applications,

TABLETS - . an introduction. what is a tablet. mobile computer display, battery and circuitry all in one unit input

TABLETS - . a mixture of powders compacted to form a single, rigid body most common dosage form possess a number of

TABLETS? TABLETS? WE DON’T NEED NO STINKIN’ TABLETS ! - . if you have a smart ‘phone it has similar apps and