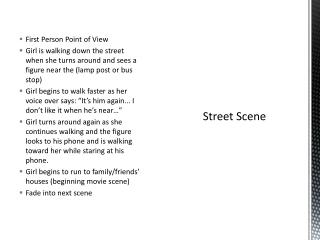 First Person Point of View Girl is walking down the street when she turns around and sees a figure near the (lamp post or bus stop) Girl begins to walk faster as her voice over says: “It’s him again... I don’t like it when he’s near…” Unit 7: Crime Scene and Physical Evidence - . crime scene : anywhere evidence may be located that will explain events, it

ACCIDENT SCENE SAFETY - . recognize the presence of a brs system avoid the possibility of inadvertently initiating the

Image Formation - . light can change the image and appearances (images from d. jacobs) what is the relation between

Fourth Grade - . geometry &amp; measurement. a map of four streets is shown below. which two streets appear to be

Fourth Grade - . geometry &amp; measurement. a map of four streets is shown below. which two streets appear to be

Act III, Scene iv - . why does desdemona not wish to admit to othello that she lost the handkerchief he had given

The Importance of Being Earnest ~ Oscar Wilde - . some key terms for this text. irony , word play (puns), understatement