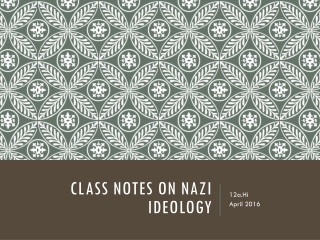 Nazi Ideology - . what was the nazi ideology? where did it originate from? . ancestry. various locations - combined

Nazi Racial Ideology - . nazi ideology. Ü survival depends on racial purity . (the germans believed that there was a

The origins of nazi ideology - . joel pato meno 2º bachiller humanidades investigación. “some of us will return to be

Perspectives on Ideology - . ideologies. what ideas are behind your ideology?. do you believe in…. …your country?.

Class Notes 2: - . microscopes. i. the light microscope . a. microscopes enabled scientist to view and study the cell.