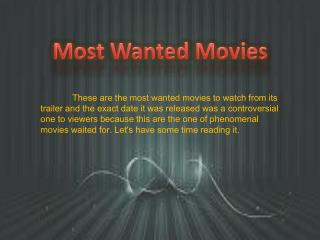 This presentation is about films that are most wanted by the viewer and film critics to watch. From its trailer until the date it was released was a controversial one to viewers really expect a lot to this films. Every films in this video receive box office success. For more information about the films Contact Us: http://actionmoviesreviews.tumblr.com/

What Men Really Want in a Gift - Http://hesgoteverything.com/ we asked 100 random men what they really wanted... this is

Everything you wanted to know about ADAAA, but were afraid to ask! - . joe bontke eeoc houston district office texas

Wanted - . kissin’ kate barlow reward: a kiss from ms. barlow (no, we’re just kidding). she is wanted for murder and

What You Always Wanted to Know About Exceptions But Were Afraid to “Raise” - . currie colket the mitre corporation

EVERYTHING YOU WANTED TO KNOW ABOUT VERTEBROPLASTY (except the hands-on) - . kirkland w. davis, m.d. division of

More than you ever wanted to know about the foot - . maj joel l. shaw sports medicine 24 may 2007. overview. describe

A) it was what Hitler wanted B) the Treaty of Versailles C) the Yalta Conference - 1. germany was divided and the

All You Wanted to Know About Medications But Were Afraid to Ask - . medications and potential side effects relevant to

INTRODUCTION - C h a p t e r 1. introduction . the goods that people wanted were not produced where they wanted to