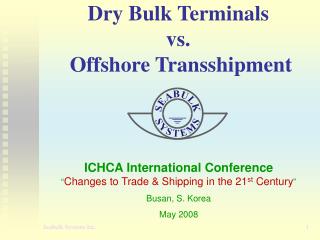 Dry Bulk Terminals vs. Offshore Transshipment. ICHCA International Conference “ Changes to Trade & Shipping in the 21 st Century ” Busan, S. Korea May 2008. The Fundamental Concept of “ Transshipment ”. Transshipment requires the ‘port’ to move to the ship, instead of Dry Bulk Packaging Division - . who we are. liqua is a global company with an extensive network throughout the world. the

Best Dry Bulk Steroids Cycle - We provide take client care is our need, and our devoted group of exceptionally

The Transshipment Problem - . this section is a slight modification of the transportation

Effect of drought vs dry conditions vs wet conditions - . drought = soil conditions too dry for much nitrate uptake by