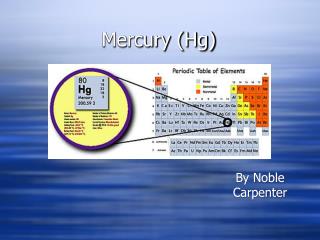 Mercury (Hg). By Noble Carpenter. Who discovered Mercury?. Discovered by ancient Chinese, Egyptians, Hindus, and Romans It was found in the Egyptian tombs It is named after the the Roman God who was a swift messenger. Mercury’s Characteristics. It is a a very heavy liquid Stoichiometry with a Twist - . given the density of oxygen is 1.439 grams per liter, how many liters of oxygen gas can be

The Inner Planets - . inner planets. the 4 inner planets in order from the sun—mercury, venus, earth and mars they are

The Inner Planets - . mercury. closest planet to the sun. 2 nd smallest planet mercury looks like our moon- many craters

Freddie Mercury and the band Queen - . b

Do Now 4-11-11 - . copy the following term and definition into your notes: element – a substance that cannot be broken

DENTAL AMALGAM - . dr.linda maher. what is amalgam??. amalgam is a special type of alloy in which mercury is one of the

The Inner Planets - . by, janet hooks. the four planets that are inside the asteroid belt –they are the planets closest

The Solar System - . terrestrial planets. mercury, venus, earth and mars relatively small composed of rock have few or no