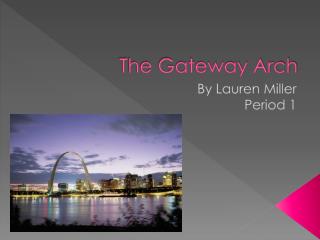 The Gateway Arch - . by: bryan thompson. the gateway arch is located in st. louis it is 630 feet tall and 630 feet wide.

Visiting the Gateway Arch - Session 2. passage i. visiting the gateway arch. lead in. a short video. the introduction of

St. Louis Gateway Arch - . looks. the base legs are equilateral triangles 60 feet per side each side at the top is 17

The Spanish arch - . by megan  and shauna  . history !!!!!!. the spanish arch was , was originally an extension of

arch - . presentation made by : karelia diaz vanessa quintero. contents. what is an arch? arch through the ages how is it

Arch - . what is an a rch ? . an  arch  is a structure that spans a space while supporting

Arch - . adriana gonzález ma. andreina pérez . arch. an arch is a structure that spans a space while supporting weight.

Arch - . curved like a rainbow or horseshoe. dazzling. impressive. honor. to show respect to or for someone or something.

Arch: - Concrete, as the romans developed it, had some very definite technical and practical advantages over the

The Arch of Titus - . by jake shepard.